Bringing China and the Gulf countries closer to Syria

Sheffield United: Could we be ready for the first indication that United World is going to be a big talking point at Bramall Lane?

China realizes that the Syrian regime needs it and is therefore counting on it to achieve its political and economic goals in the Levant region, including the accumulation of regional influence at the expense of the United States of America. Thus, China can achieve its objectives in the Middle East through Syria, through:

China seeks to create opportunities for its businesses and investments to participate in reconstruction in Syria, and the Chinese Special Envoy to Syria (Shi Xiaoyan), saying that:

“China is convinced that it will be part of the reconstruction process after the end of the war in Syria, and China’s long-term goal is to expand its economic strength and establish military bases in the region.”

Here, we find this at the international and regional political level, (the Syrian geography is one of the fields of the international scramble between China, Russia and Iran, facing the West led by the United States of America). Given its proximity to all spheres of influence in the Middle East. Here, we find that (Syria’s distinguished geopolitical position) has bolstered China’s growing presence in the Middle East through Syria as a strategic focus for Beijing’s sphere of influence. Here, Beijing sees the Assad regime as a (factor of stability in the face of the expansion of religious extremism).

In addition, the increase in Chinese tensions with the United States, due to the creation by Washington of defense and economic alliances directed against China at the heart of its areas of influence, such as: (the Quad Alliance and the Aukus Defense Alliance), has been an urgent reason for China to be close to areas of US influence in the region. Therefore, (China sought to integrate the Syrian regime at the Belt and Road Initiative) and attempted to take advantage of the urgent reconstruction needs in Damascus, establish a Chinese settlement in the heart of the Levant and to strengthen its influence in the Middle East through Syria.

The arrival of China in (the Syrian ports of Tartous and Lattakia, overlooking the Mediterranean), is an interesting opportunity for the Chinese “Belt and Road” initiative, to link the Eurasia region to Syria and its extensions to the Republic. people of China. Thus, it will be completed by (Beijing’s anchoring in the Greek port of Piraeus and Israeli ports, such as: “Haifa and Ashdod”), and this link highlights Syria’s position on the Silk Road, according to the Chinese vision. Therefore, (Syria has been included in a large number of railways that China builds in the region).

Here, China is expected to move more towards (benefiting from the US withdrawal from Syria, as part of Beijing’s increased efforts to expand its presence in the Arab Gulf and Middle East regions). China has also become more willing to access (to the region’s markets and to the shores of the Mediterranean close to the Syrian border, with the aim of consolidating its economic project for the Belt and Road), by promoting Chinese investments and by delivering them to the world.

China and Russia have also been keen to create (an international political consensus in Syria), through (their efforts at the United Nations to protect the regime of President Bashar Al-Assad, and to deal with Western influence and in the region). Here we find that Chinese actions fall partly within the framework of (a cover for its broader Middle Eastern ambitions), and the Chinese presence in Syria can be analyzed by identifying the main objective of China regarding (its desire to gain a military foothold in Syria, despite Washington’s knowledge of the Chinese plan). But, he wasn’t looking for a real confrontation with Chinese influence.

This brings us to an important point, which is (arms sales to expand Chinese influence), seeing the Middle East as a region of “intense competition among the great powers, at a time when the United States America are trying to adjust their position in the region, and maybe change their strategy and also reduce their presence, ”which I announced before, so both (Russia and China have tried to take advantage of the vacuum behind the gradual withdrawal of the United States from Syria).

Within the framework of (the new Russian-Chinese security and defense strategy in Syria), and here, Russia has started to launch a campaign of harassment against American and Western forces affiliated with the “international coalition” in Syria, with a long-term goal that leads to the expulsion of the United States from Syria. Skirmishes have multiplied with the American side to force it to withdraw gradually from Syria, in particular with (the Russian forces stopping the American military convoy in the northeast of Syria, and sending it back to its place of departure, considering that ‘he violated the “disengagement” agreement, an agreement reached by Russia and the United States of America, since the start of the conflict and their operations in Syria in 2015), the purpose of which is to prevent any accident between forces from both countries, but the “US Pentagon” declined to comment on this incident.

We note that Sino-Syrian cooperation extends to common security and diplomatic areas. China has supported Syria in the Security Council, and China has not hesitated to (repeatedly veto with Russia to support President Bashar Al-Assad’s regime). Beijing is also coordinating with Damascus in the field of (fight against extremism and elimination of terrorism and its extensions inside China in the Xinjiang region, in particular after the participation of more than five thousand Uyghur Muslim fighters in the war in Syria alongside ISIS).

Here, Chinese and Russian influence in Syria and the expulsion of the United States of America from it paves the way for the activation of the (Iranian plan to establish a corridor to the Mediterranean through Syrian ports ), and underlines the importance of this Iranian corridor for the Chinese Silk Road Initiative, especially since it passes through Syria, Iraq and Iran. Therefore, Chinese interest in the development of Syrian railways and ports is a prelude to their connection with regional neighboring countries, such as: (Lebanon, Iraq and Iran), which (contributes to reconstruction and economic development).

Thus, Beijing and Damascus have signed cooperation agreements in several areas, and (Chinese investments in Syria find an outlet in Iranian ports, via the arrival of the “Silk Road” to the Khorramshahr region in Iran) , and from there China envisages (linking its investments in Iraq and its transfer to Syria and vice versa, then to the rest of the countries in the region and its ports on the Mediterranean or via the rail and motorway networks that connect everything the world).

The construction of a railway between Iran, Iraq and Syria with the support of China began in November 2018, as part of the (reconstruction of the Middle East financed by China and Russia, and eventually linked it to the Syrian port of Latakia, as a hub on the Mediterranean Sea, stressing that “the rail system in Iran is connected to the railways of Central Asia, China and Russia), and if the Shalamcheh-Basra railway line is constructed over a length of 32 km, Iraq can transport goods and passengers to Russia and China and vice versa. This line will be the first stop, and the second stop is expected to be a 1,545 km long railway and highway to the Syrian port.

Therefore, China seeks to be present in (Syria’s ports to link it to Chinese maritime influence in general in the Middle East and Mediterranean countries), where (China is in fact present in three actual ports on the Mediterranean, which are ports: Haifa and Ashkelon in Israel, and Mina Piraeus in Athens, Greece). And here it should be pointed out that the (American pressures exerted on Israel to prevent Beijing from using the port of Haifa). Israel previously rejected a 1.5 billion dollar contract offered by China to build a power plant after the United States of America warned its other allies in the Middle East against accepting investments Chinese, China has therefore chosen the other (country that is not is not aligned with the United States of America to invest, especially in Syria).

China is seeking “investments in the Syrian ports of Latakia and Tartus, and is seeking more maritime influence in Syria on the shores of the Mediterranean, after fears of losing its maritime influence in the Israeli port of Haifa due to the American pressure on Israel. “In October 2018, China provided assistance in the form of generators to the Syrian port of Latakia, indicating its willingness to invest there, to secure a position of maritime influence overlooking the ports Mediterranean. Thus (China wishes to invest in the ports of Lebanon, in particular in Beirut, not for its direct financial returns, but to complete the “Silk Road” project, and to ensure an outlet on the Mediterranean coast, by linking Syrian ports to their Lebanese counterparts).

Therefore, (China’s regional participation between Iran, Iraq and Syria on the wider “New Silk Road” is of great importance to connect them all together through port and rail networks) , especially since Iraq had already signed a memorandum of understanding in September 2019, to join the “Belt and Road Initiativ” as part of a new oil against infrastructure program. This plan includes (China’s reconstruction of the war-torn region as part of a phased program of physical infrastructure, such as: railways, roads, power projects and water, and intangible infrastructure, such as:).

Also (the “Four Seas” strategy, first announced by Syrian President Bashar al-Assad in 2004, and sabotaged by the Arab Spring revolutions), finally resumed work, after 7 countries signed up for the join, in 2010. This maritime strategy involves (reconnecting the four major water systems “Mediterranean / Caspian Sea / Black Sea / Persian Gulf” to each other through corridors and rail infrastructure as a motive for win-win cooperation Syria, Iraq, Iran and China with countries in the region and the Middle East), according to Chinese planning. Once these four seas are connected (Syria will become the main point of intersection of investment and transport) in the region.

The most important point here is the assertion by Syrian President Bashar Al-Assad that (the Syrian military, security, political and economic decision has become dependent on the Russians, Iranians and Chinese), the Syrian regime aspiring to more great interests to be gained through a greater strengthening of the Chinese presence in Syria. Therefore, China sought to prove its presence in the Middle East through the Syrian gate and prove (the failure of the US-backed Arab Spring revolutions). Therefore, Chinese economic support has become an outlet for the Syrian regime to support it, as well as the strengthening of the Chinese alliance with the two (Russia and Iran) across Syria.

Based on the previous analysis, we can understand that the reasons for Chinese support when Syrian President “Bashar Al-Assad” took over the presidency of the Syrian Republic for a new term in May 2021, at a time when “Bashar Al-Assad “exaggerated the Sino-Syrian relationship to prove that he is not politically isolated and that he has a number of (potential partners to support reconstruction efforts in Syria), with the continued efforts of the China since the start of the Syrian revolution to provide various forms of humanitarian aid and financial subsidies, and China’s support for the Syrian regime to deal with the Corona virus (Covid-19) pandemic, through medical aid and vaccines against the virus.

Previous PharmaTher Applies For Orphan Drug Designation From FDA For
Next New drug therapies must be part of the conversation around diabetes, says Netcare doctor Alberlito 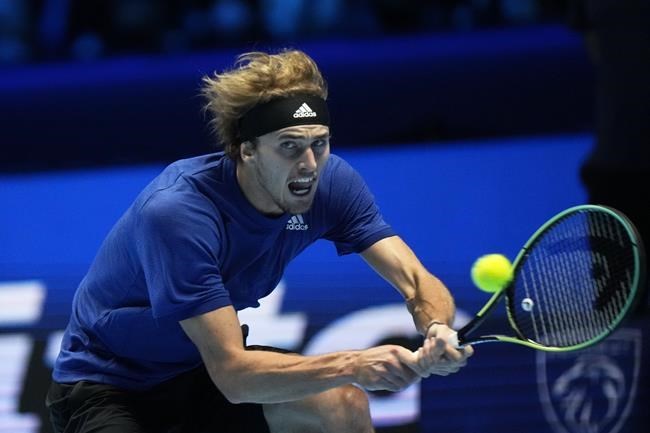 A sign for ’22: Zverev dominates to win ATP Finals trophy

TURIN, Italy (AP) – If Alexander Zverev’s performance this weekend is any indication, a lot …